Trading psychology is a critical aspect of achieving success in the forex market. It deals with the emotional condition of a trader when entering and exiting trades, looking for potential trade opportunities, or carrying out other trading-related tasks.

Usually, most traders experience losses because of negative emotions that poison their rational decision-making processes and cause them to make improperly planned trade decisions.

We, as humans, are innately emotional creatures, something which dictates our judgments. We tend to elevate our egos when making decisions or make outbursts when we think things are not working right.

Although these emotions are not necessarily wrong, how we react to them is what matters, especially when trading currencies.

If emotions get the best of you and you fail to control them, illogical decision-making crops up. Eventually, even if you are an experienced trader, losses start accruing even in trades that could have been profitable.

Some traders think that divorcing themselves from emotions could solve their problems. However, that’s impossible—if you are still a human being. If you use the feelings well, they may assist in accelerating your trading success.

Trading psychology can make the difference between success and failure in forex trading. Having a stable mental state is an essential element you need to become a consistently profitable trader.

So, how can you control your emotions and ensure they work for you and not against you?

Let’s start by talking about the four main psychological obstacles to successful trading.

Fear is the natural reaction we display to threats that could cause us harm. Being fearful is normal. In fact, the emotion is regarded to be crucial to our survival. Without feeling afraid, it will be difficult to notice danger and escape from it.

However, in forex trading, fear is harmful when we allow the perceived loss-making threats to cause us to make irrational and unsound decisions.

Instead of motivating us to execute trades without worries, fear draws us back from making trades, convincing us that we are wrong. This fear of being wrong overrides the power of our analysis and the amount of time we’ve taken looking for good setups and points us to the darker side of the market.

Another type of fear is that of missing good trades. This fear often makes us enter trades at any price, without waiting for the appearance of profitable trade setups. A fearful trader who does not want to miss good opportunities frequently disregards a rational approach to trading and allows excitement to overrule their decisions.

The last type of fear, which is even more dangerous, is that of loss. The fear of failure causes a psychological scare in our minds and send us dreadful warnings before making trade decisions.

For example, let’s say you have a long running position on the EUR/USD currency pair, and bad news comes regarding the state of the Eurozone economy, what would you do?

In such situations, most traders will feel scared, overreact, and quickly close the trade without a second thought. Even though they may be taking action to avoid losses, fear usually drives such decisions and could lead to missing out on the possible gains.

Greed is even more dangerous than fear. Greed is the selfish emotion that drives you to want more profits always when trading forex.

Let’s put it straight: every forex trader yearns to get substantial returns from their efforts. However, this yearning becomes unproductive, even harmful, when it’s too powerful.

Nothing is wrong with the desire of realizing financial success in forex trading. But, if these greedy desires suffocate your common sense and drive your trading decisions, then there’s everything wrong with them.

There’s a common saying among financial traders that “when bulls and bears make profits, pigs are slaughtered”. The pig is a very greedy animal, and the analogy is useful in the trading business, since it shows that the market does not respect pigs—greedy pigs lose their money.

As such, the psychological emotion of greed is even more harmful than fear. Fear can prevent you from making trade decisions or make you exit too early. Conversely, greed compels you to push the buy or the sell button in a manner that’s far too risky. That’s why greed can be much more destructive than simple fear.

Since greed pushes us to act irrationally, it’s a very dangerous emotion. Just like drinking alcohol, greed can prompt you to behave foolishly when it has intoxicated your system. If greed cripples your trading choices, then you’re drunk with it, and you’ll soon wipe out the trading account.

For example, traders intoxicated with greed usually fail to exit their winning positions because they think the market will forever obey them. Greedy traders also add to open positions whenever the market has moved according to their expectations. Other dangerous behaviors of greedy traders include overleveraging, quickly jumping into trades, and overtrading.

Whereas the primary intention of revenge trades is to try to win back the losses, it often results in more losses than initially intended. Revenge traders often blame the market for their losses and end up placing retaliatory and miscalculated trades.

Revenge trading is harmful because of three main reasons. First, since it’s usually not planned well, it leads you into making hurried trades that are less likely to be profitable. If you engage in revenge trading, you will be gambling and not trading. You will speedily place trades without any planning or comprehensive analysis.

Secondly, because you become desperate to recoup the losses, revenge trading forces you to open trades with larger position sizes. You will ignore the risk management part of your trade plan just because you want to win back the losses quickly.

Lastly, it is an emotional trading habit that’s driven by the wrong motives. It changes your focus from rational trading decisions to emotions-driven trading choices. Your emotions cloud your thoughts and make you throw discipline and sound mind out of the window, which bleeds your account—pip by pip.

For example, you can enter a long order on EUR/USD, but you end up losing 50 pips. Frustrated, you decide to double your position size on the next trade so that you can recoup your initial loss. However, the trade goes contrary to your expectations again, causing further damage to the trading account. It will be easy to open an even bigger position now, because the market “owes” you money and you want to take “your” money back.

Lastly, euphoria can also cripple your trading success. It is the feeling of excitement often realized after experiencing several big wins in the forex market. Your euphoric state convinces you that your understanding of the movement of currency pairs is perfect and your analyses are faultless.

While it is normal to feel excited after winning a trade, overconfidence can result in problems. For example, because you placed a long order on EUR/USD and made a win, this doesn’t mean that another trade will automatically result in a win. The market does not work like that.

Euphoria often leads to a slippery slope of trading errors and losses. After a series of successful trades, a trader can become overconfident and start placing trades without careful analysis of the ever-changing market conditions.

Overconfidence can also cause you to risk too much capital, falsely believe in your analysis, or forget about your trading plan. Having a party after each successful trade is an emotional motive that can increase your trading flaws.

How to Overcome the Psychological Obstacles

Forex trading education is one of the critical ingredients for overcoming the above-mentioned psychological impediments. With proper training, you will gain essential skills for making rational decisions, instead of relying on your gut feelings.

If you want to blindly enter and exit trades without having sufficient reasons for making the decisions, you’ll become emotional, and hurt your trading capital.

You need to understand how the forex market operates and the factors that cause its movements. For example, if an economic news report is released, you need to know how it is likely to affect movements in the market, instead of becoming fearful and starting to close and open trades haphazardly.

A proper forex education will assist you in creating a strategy capable of generating consistent profits. Trading without a profitable strategy gives too much room for disaster. However, a reliable trading strategy will help you to relax and be calmer, as it reduces your risk and your anxiety.

Trading with a robust plan lowers risks and assists you in keeping your emotions under control. Typically, a trading plan consists of a set of guidelines and strategies for executing trade decisions.

A trading plan is usually created after doing an extensive analysis and studying the market behavior. It is what you need to maintain consistency and profitability in your trading.

For example, a good trading plan should answer the following questions.

Emotions are can wreck your control if you let doubt and fear live freely. However, a well designed trading plan will assist you to stay focused and trade profitably without being sidetracked by your gut feelings.

Trading without a plan will leave you at the mercy of your emotions. Consequently, you’ll be taking trades based on feelings and without making any meaningful analysis of the market behavior.

With a plan, whenever there is a sign of trouble, you’ll not need to adjust your trade decisions fearfully or greedily. All your choices to enter and exit the market will be based on your predefined set of guidelines—giving no room for any emotion to cloud your mind.

For example, if your trade plan specifies that you will be entering retracement trades whenever the market bounces off one of the Fibonacci levels, you should stick to that rule as much as possible.

Here is a 4-hour chart of the AUD/USD illustrating how you could apply the rule. 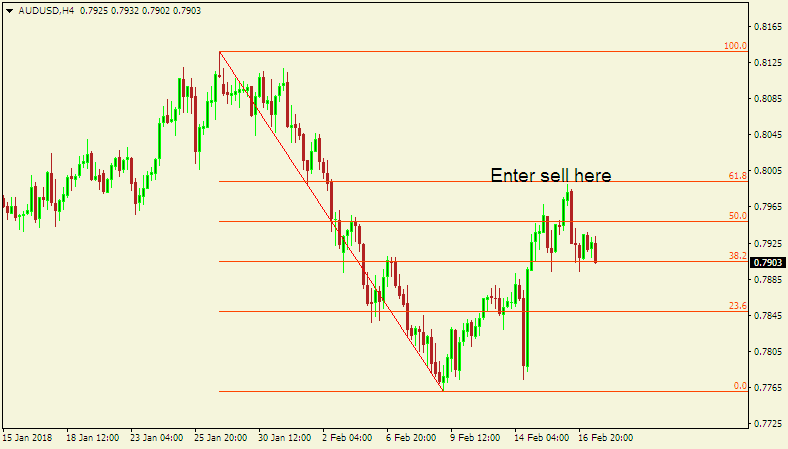 Proper risk management is what distinguishes a trader from a gambler. If you expose too much capital to the market because of revenge or euphoria, you could end up with immense losses.

To avoid becoming an emotional trader, do not risk an amount of cash you cannot lose comfortably. A common rule of thumb is to risk only 1% of your capital for each trade.

For example, here is short trade on the EUR/USD. 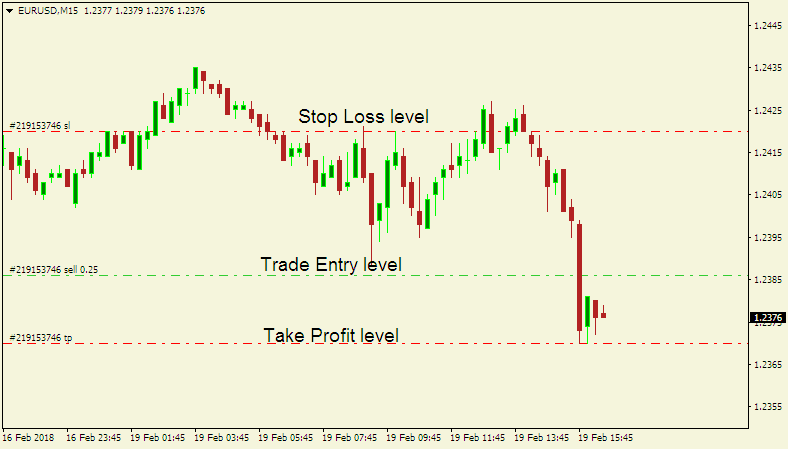 An unrealistic mindset is a major cause of emotional trading. If you are not focused and composed in your trading decisions, you will easily adopt the dangerous habit of being fearful, greedy, revengeful, or euphoric.

You need to have a realistic mindset and become an emotionally mature trader. Remember that your desire for profits alone will not be enough make you acquire those profits. You should train yourself to approach the market with discipline and avoid decisions based on ecstatic or other emotions.

With a clear and logical mindset, your emotions will lack enough strength to control your trade decisions.

The psychology of forex trading is an essential aspect of becoming a successful trader. For most traders, this is what triggers the biggest percentage of trading mistakes.

Therefore, you need to strive to keep your emotions in check. If you fail to control them, they will surely control you—and you’ll regret the trading decisions the emotions lead you into.

The success or failure of your forex trading career depends on your expertise at eliminating emotions from trading decisions, and in that expertise resides the alpha and omega of profitable currency trading.